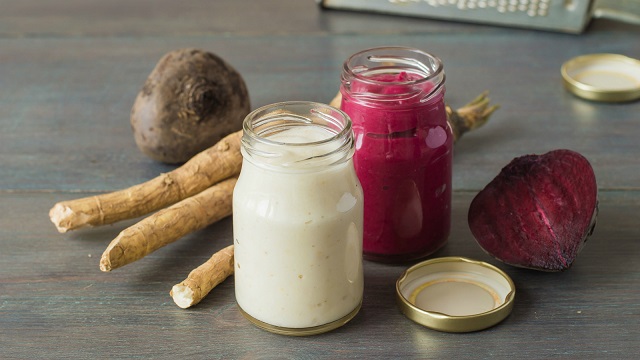 Horseradish is the herb of the year and is best known for the use of its root in making a sauce for meat.

Beg, buy or steal some horseradish root and grate it finely. This may make you cry but persevere. Put into a blender with a quarter cup of sour cream, a teaspoon of Dijon mustard, one tablespoon of mayonnaise, one tablespoon of chopped chives. Whizz it up and you should have a creamy tangy accompaniment to a meat of your choice and it tastes much better than the kind you can buy in the supermarket. You can also experiment by adding other ingredients to this basic recipe such as garlic, coriander, ground cumin or whatever your fancy dictates. Traditionally horseradish sauce is eaten with roast beef unless one is a vegetarian in which case hold the beef.

For those gardeners among you why not grow horseradish? You’ll need a piece of ground where spreading won’t be a problem, although I have to say this has not been an issue here. Our horseradish as stayed firmly in place for several years and refuses to spread. Obtain a piece of root from a friend or a market. Dig a hole slightly larger than the root and place it with its head just above the surface. Pack soil around it and watch it grow. Fertilize occasionally but limit nitrogen otherwise you’ll get a lot of leaf and little root. Try an organic fish fertilizer. It smells but it works! It will probably be 12 to 18 months before you can harvest some root. Dig the roots in early Spring when the green tops begin to show. Keep the larger roots for processing and replace the others in the same spot. And remember horseradish appears benign until you peel and grate it.

Horseradish has particular meaning for us this week as it is an important part of the Passover seder symbolizing the bitterness felt by the Jews when they were slaves in Egypt at the time of the Pharoahs. Eaten grated and raw it will certainly bring tears to your eyes.

The Challenge Of Restaurants: Dealing With Fluctuations In Raw Cost Whilst…

A Seafood Junkie, Are You? Taste This Shellfish at Least Once in Your Lifetime

Cake Decorating Instruction – A Chance To Learn From The Professionals ?