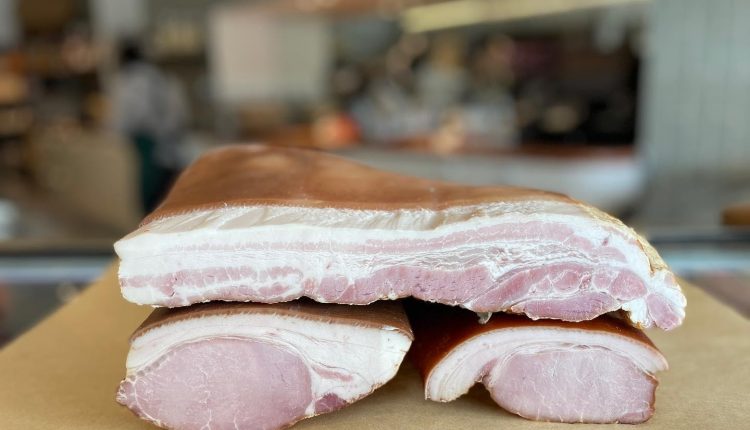 It’s crispy, it’s fatty, it’s a flavour bomb in a mouthful. It’s bacon. Known to be basically delicious on anything, we love our bacon crispy with eggs or added into a cheats carbonara. Read on to find out more about bacon, and 3 easy ways to cook with it.

Bacon is a salt-cured piece of pork. It’s generally made from the pork belly, or from the back cut of the pig. Whilst we’ve never met a bacon we’ll refuse, we are particularly partial to streaky bacon. It’s made from the belly, so it’s fatty and extra crispy. This is the one you want to use to fry up by itself, or wrap around sausages or roast meat. Buy it from Meatsmith, one of the premier fine meat purveyors in Melbourne, Australia.

How to cook bacon?

You can cook bacon in the oven, on the stovetop or even on the grill. If you’re opting for a stovetop, lay your bacon on a cold pan before turning the heat on. It’s best cooked over a low heat for a long time, and you need to flip it as soon as it starts to curl. Instead, if you’re cooking bacon in the oven you want to turn the heat up really high to 200C and cook for 15-20 minutes until it’s done to your liking. It’s best to drain on some paper towel after cooking bacon so the fat can drip off.

How long does bacon last in the fridge?

Let your nose be the best judge here! But generally speaking, most opened bacon should last around a week in the fridge. You can also store it in the freezer to extend the shelf-life to 6 months.

Bacon adds flavour to whatever meal you put it in. We love to use it to wrap around a roast, use it in stuffing for our meat or add it to a pie. Here are three ideas for how to make it sing.

Carbonara is traditionally made with pancetta, but it’s just as delicious with some streaky bacon. Slice it into strips and fry in a pan until super crispy and start cooking your pasta at the same time. When the pasta is al dente, add to your pan with the bacon, and pour over two whisked eggs, parmesan cheese, a splash of pasta cooking water, and finely cracked black pepper.

There’s nothing quite as comforting as a good bacon-lettuce-tomato for lunch. Try it with some smoked bacon, juicy tomato, cos lettuce and kewpie mayo on a crispy ciabatta bun. Too easy, too tasty.

Fried rice with bacon and eggs

We all know bacon and eggs go together perfectly, so it’s a no brainer to add them to your fried rice. To make, heat some oil in a wok and combine bacon, onion, ginger and garlic. Add some pre-cooked rice (it’s normally better if it’s a day old), to your wok and cook for a couple of minutes. In a separate fry pan, fry up some eggs until cooked to your liking. Add your favourite sauces like soy, sesame oil and some butter to your rice before serving with your fried egg on top.

There are really so many ways to use this popular smallgood- from soups to pasta bakes, to salads, it can really go in most dishes. Enjoy it now from Meatsmith!

The Challenge Of Restaurants: Dealing With Fluctuations In Raw Cost Whilst Maintaining Level Of Service

WHY ARE SPANISH FOODS SPECIAL?